The mine was renewed by the members of the former association "Mining in the Past" and officially opened to visitors at the town's 700th anniversary in 1992. The pit, which is a part of the actual Holy Trinity Mine, counts about 250m of a secure walking path and is regarded as a rather small visitors' mine. Nonetheless, the mine is especially remarkable because the traces of medieval silver mining are unchanged as it was not influenced by the uranium mining of the "SDAG Wismut" (lit.: Soviet-German Corporation Wismut; until 1991; today known as Wismut Ltd.). Within the guided tours, lasting about 45 minutes, the visitors can explore the mine whilst learning about mining, geology, mineralogy, and the traditions of the Ore Mountains. Upon request, it is possible to arrange special guided tours or presentations on different topics concerning the mining industry. Furthermore, the association's venues above the ground are available for festivities and meetings. Amongst others, a cabin, called "Huthaus" with a capacity for up to 25 people and an included BBQ area is available. Besides, local and international occurring minerals can be viewed or bought during the opening hours of the visitors' mine. 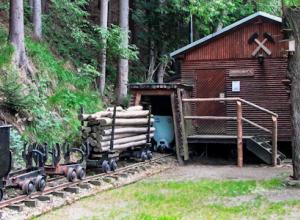