On the 3rd of November 2009, three "Stolpersteine" (lit. stumbling blocks or stones) were installed in front of the building of Lange Straße 19, in which the medical store "Augustin" is located today. These "Stolpersteine" are supposed to be a reminder of the former owners of the house: Family Motulsky.

On the 10th of November 1938 at about 5 am, all windows of the clothing store "Motulsky" got smashed. During the night of the 9th to the 10th of November, the windows of Jewish businesses were destroyed on purpose all over Germany. This night went down in history as "Reichskristallnacht" (lit. Crystal Night). 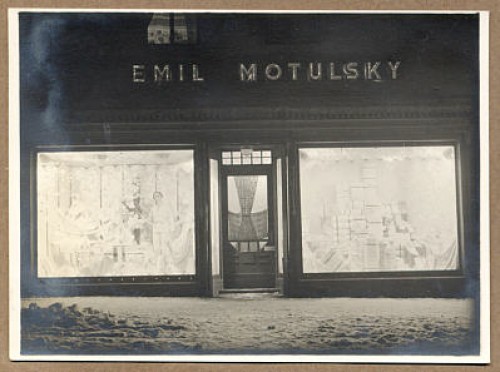 In Zschopau, two Jewish families which owned businesses at the market square fell victim to the Nazi regime.

We do not have any information on the fate of the second family, the Messerschmidts. It is probably the fact that family Motulsky had four children which made them stay in the people's minds more strongly. Even until today, we can find connections to the three children who were saved and their descendants among the current inhabitants of Zschopau.

Searching for traces, we can find the following entry in the town's archives

"Business registration on 04.09.1912, MOTULSKY, Emil David, 25 years old from Zschopau in the building with the town registration number 45 Langestrasse - corner Neumarkt. Trade of manufactured goods, haberdashery, wool and linen goods. Additional entry: "Closed since 10.11.1938, de-registered by the owner on 03.03.1939."

The immense suffering following this last entry is hardly to imagine. Despite organized help, only three of the four children survived the dreadful happenings abroad. The family’s youngest son, Ludwig, and his parents were deported to the concentration camp Belzek and got murdered. On the initiative of the inhabitants of Zschopau, who were not able to deal with the suffering of the family and all the other victims, three "Stopersteine" by the artist Gunter Demnig were installed in the pavement as a reminder of the past.

More than 100 people took part in this moving event.