The carillon (German: Glockenspiel) was donated by J.S. Rasmussen to celebrate the 700th town anniversary in 1938 (cf. supplement of the daily newspaper and gazette 02.07.1983).
However, the first mentioning of Zschopau dating back to the year 1238 is not officially recognized. The first real documentation dates back to the year 1286.

The carillon was installed on the tower of the old town hall in 1938. 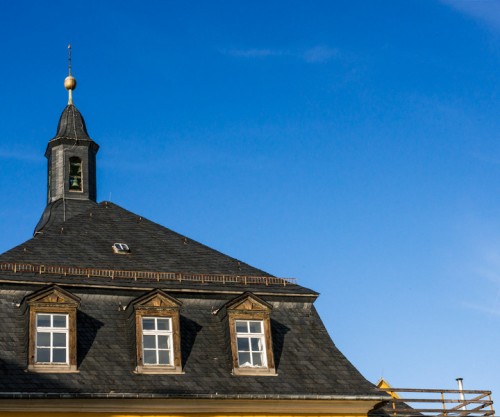 In order to carry the considerable weight of the bells, additional girders had to be set up and the roof light needed to be extended.
Above that, a new room was constructed in the attic to accommodate the electric time switch and the actual music box.

The carillon consists of 17 bells made of copper and is tuned in B flat major. The prototype for the famous carillon of Salzburg. The bells are made of a blending of 78% copper, 22% tin and an addition of a silver alloy. They were founded in Munich in 1983.

The chime encompasses the following tunes: b, h, c, d, es, e, f, f sharp, g sharp, a, b, h, c, d, es, f. Each bell has the year 1983 and the name of the manufacturer engraved. Moreover, the biggest bell additionally carries the following inscription: "This carillon was donated by J. S. Rasmussen on the occasion of the 700 years anniversary of this town. A. D. 1938“. The total weight including the bell cage, magnetic hoist and mechanical elements is about 950 kg.

The chime was manufactured by the foundry of the brothers Oberascher and the owner Rudolf Oberascher in Munich in 1938.

Then, the bells rang in the morning, at noon, and in the evening. Usually, the songs of the local poet Anton Günther were played. Then, at seven in the morning the song "Deitsch un frei wolln mer sei" (We want to be German and free), at noon the song "Vergaß dei Hamit net" (Don't forget where you come from) and at seven in the evening the song "S' is Feierohmd" (The day's work is finished) was acoustically presented.

During and After War:

As many other bells, also the carillon of Zschopau was confiscated, taken down and transported to Hamburg during World War II. Fortunately, the bells were not destroyed and sent back to Zschopau. They were installed in the tower of the town hall anew. However, one of the bells was still missing and discovered by chance as a ship's bell on one of the passenger's ships of the "Weiße Flotte" (lit. White Fleet) in Dresden. It was brought back to Zschopau in 1947 to finally complete the carillon again. On the second of Advent in 1949, the people were able to listen to the sound of the bells again. During the following years, increasing malfunctions in the technology and electricity were the reasons why the bells were not played any longer.

After being mended by the electronic services in Zschopau in 1984, the bells rang again for a short period at midday.

During the 1990s the request for a comprehensive restoration of the carillon rose again.

On the 28th June 1992, Mrs Sybille Krägel, granddaughter of Jörgen Skafte Rasmussen, presented a memorial plaque, which pointed out her grandfather as the donor of the carillon. The same family
donated another 11.000 German Mark for the restoration of the bells.

Due to its complexity and therefore complicated task to repair it, it was necessary to employ a specialist firm. With the company "Turmuhrenbau Meißen" (lit. Clock Tower Constructions Meißen) and its owner Dipl. Ing. Klaus Ferner the town had found a first-class specialist. He was able to repair the carillon by renewing the mechanics and replacing the obsolete electronics by computer technology.

Mr. Ferner worked closely together with Professor Günter Schwarze who is a composer and teacher at the Dresden University for Music Carl Maria von Weber.

Today, the carillon can be listened to at the following times:
9 am; 1 pm and 6 pm. Furthermore, one can listen to it on Thursdays at 2:15 pm when the guided city tour takes place in Zschopau.

At these times, traditional folk songs can be heard across the market squares. Despite some missing tunes, the carillon was masterfully intonated by Professor Schwarze.

A selection of Christmas songs is available during the winter season.

Finally, some words on Zschopau's carillon by the clock tower and bell manufacturing specialist Klaus Ferner:

The carillon with its bronze bells, which are installed on top of the town hall, is characterized by its meaning as historic memorial. The historical significance, which leads back to the first third of the last century, justifies the still existing interest of the community in the carillon. As a total work of art it is an essential piece to remember the era of craftsmanship. Besides its specific construction, it is also a one of a kind construction in the local area.“